１．Factors in the decline of Japan’s agriculture

Japan’s agriculture is in decline. This decline is particularly conspicuous in the case of rice agriculture. Rice farms account for 70% of Japan’s farms, but they produce only 20% of the nation’s agricultural output. This fact serves to demonstrate that rice agriculture in Japan is being conducted by small-scale and inefficient farms.
The attempt to ensure farming incomes by manipulation of the price of rice is a particular characteristic of Japan’s postwar agricultural policy. From the 1960s onwards, Japan agricultural cooperatives (JAs) launched a major political push in relation to rice prices under the Food Control System, which saw the government purchase rice from farmers. Pressed by the agricultural cooperatives, which were organizing the farming villages that provided a support base to the LDP, the government and the ruling party increased rice prices.
Since the scrapping of the Food Control System in 1995, high rice pieces have been maintained by the acreage reduction program. Under the program, farmers are paid subsidies to reduce their rice production in order to increase the price of rice. Taxpayers bear a burden of 400 billion yen for these subsidies. In addition, high rice prices mean that consumers bear a burden of 600 billion yen. The scale of Japan’s rice production is two trillion yen, and the nation’s citizens bear one trillion yen.
High rice prices have had a negative impact on rice agriculture. High prices have enabled high-cost, small-scale part-time farmers who should have retired from the industry to continue to produce rice. These farmers will not relinquish their land, making it difficult for full-time farmers attempting to live exclusively by farming to obtain land and increase the scale of their operations, thus reducing costs and increasing profits.
Japan’s agricultural cooperatives work to maintain high rice prices and keep the acreage reduction program in place. Despite the fact that they are organizations formed by farmers to enable agricultural chemicals and other farming supplies to be purchased at low cost, agricultural cooperatives have exploited the fact that the Anti-Monopoly Act does not apply to them in order to push supplies including fertilizers, agricultural chemicals, farm machinery and animal feed onto farmers for as much as twice the amount paid in the U.S. Naturally, this has also increased the prices of agricultural products.
The high prices of farming supplies and agricultural products mean that the agricultural cooperatives that sell them are able to collect a proportionally high revenue from sales commissions. High tariffs are necessary in order to maintain the prices of agricultural products at levels higher than international prices.

Against the background of postwar food shortages, the agricultural cooperative system was formed in order to facilitate the collection of rice from farms by the government. Japan agricultural cooperatives (JAs) represented an updated version of the wartime agricultural control bodies which had managed all agricultural procedures, from financing to the collection of farm produce, before the war. Because of this, the JAs were permitted to conduct banking service as well as other business operations, a privilege not extended to any other corporate entities in Japan; in addition, despite the fact that they should have functioned as farmers’ professional organizations, any resident of an agricultural cooperative’s region of jurisdiction could become an associate member of the cooperative and utilize any cooperative services such as banking. Later, agricultural cooperatives were also granted permission to engage in life and non-life insurance business. As a result, they became corporate entities spanning an unprecedentedly broad range of activity.
From 1955, farming incomes largely stagnated. (Figure 1) Large numbers of rice farmers had become part-time farmers, and from the latter half of the 1960s, the non-farming incomes began to exceed farming incomes. The aging of farming families without successors also continued, and pension income increased with age. 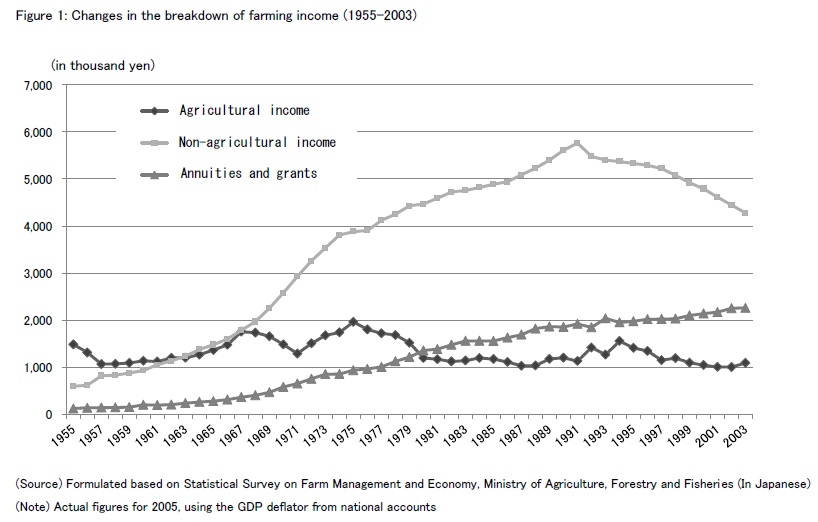 Incomes from non-agricultural jobs and pensions, in addition to profits from the diversion of agricultural land to non-agricultural uses, which amounts to several trillion yen per year, is deposited with JAs, which also function as banks. The total amount of deposits with JAs has reached approximately 94 trillion yen, making them collectively the second-largest mega-bank in Japan.
Because agriculture is declining, only 1-2% of the funds held by JAs are loaned for agricultural purposes. JAs encourage local people to become associate members, and 30% of the funds deposited with them are loaned to associate members as housing, car or education loans, or to former farm families, for example for the construction of apartments. The remaining 70% of the funds are invested on Wall Street by the Norinchukin Bank, the national organization of the JA banks. Active recruitment of local people has seen the number of associate members of agricultural cooperatives increase annually, turning them into “agriculture-business” cooperatives in which there are as many as a million more non-farming associate members than regular members. Increasing the price of rice has set all gears turning in harmony for Japan’s agricultural cooperatives.
Thus, organizations which were created in order to develop agriculture have actually developed themselves by promoting the decline of agriculture. The abolition of tariffs by the TPP, resulting in a reduction in the price of rice and the withdrawal from the industry of inefficient part-time farmers and the realization of an agriculture dominated by full-time farmers, would be a massive event which would shake the foundations of the agricultural cooperatives. This is why they have mounted a movement to protest the TPP which has collected more than 10 million signatures.
Every country has bodies which engage in political activities in the cause of agriculture, but only Japan’s agricultural cooperatives (JAs) also engage in economic activities. However, the political and economic interests of JAs are directly linked to the maintenance of high prices. No pressure groups in the U.S. or the EU are fixated on commodity prices in this way.

When it returned to power, the LDP re-examined the acreage reduction policy, and scrapped the Income Support Direct Payment Program introduced by the DPJ in 2010. The funds which became available were used to increase the subsidies for the production of rice flour and fodder rice previously introduced by the LDP during its last term in power (the 2009 harvest season). The subsidy was increased to revenue from the sale of rice for direct human consumption use in the 2013 harvest year. A 12,000 yen subsidy called the Growing Region Subsidy was also offered, making the total subsidy provided 117,000 yen per 0.1 hectare. Naturally, growers also received income from the sale of rice flour and fodder rice. (Figure 2)
If farmers produced rice flour and fodder rice, subsidies alone enabled them to earn revenue in excess of the price of rice in the 2013 harvest year. Revenue from the sale of rice for direct human consumption use fell to70,000 yen in the 2014 harvest year. Given this, it is clearly advantageous for growers to produce rice flour and fodder rice.
Zennoh purchased 200,000 tons of 2014 fodder rice, but has already planned to triple that amount for rice produced in 2015, to 600,000 tons. If growers expand their production of fodder rice and rice for flour, then the production of rice for direct human consumption use will decline by this amount, and price increases will place pressure on the household budgets of low-income consumers. In addition, the total amount of acreage reduction subsidies will increase, resulting in an increased burden on taxpayers.

The production of high volumes of fodder rice and rice flour would significantly reduce imports of corn and wheat from the U.S. Disputes can be brought to the WTO concerning the provision of subsidies of even 5% of selling price. The acreage reduction subsidy for the production of rice for flour and fodder rice corresponds to more than 100% of the price of rice for direct human consumption use. If the U.S. was to bring a dispute to the WTO in relation to Japan’s acreage reduction subsidy, it would certainly win. Given that the WTO permits cross-retaliation (the application of retaliatory tariffs to products in different categories; for example, if agricultural subsidies are causing issues, the application of tariffs to non-agricultural manufactured products), the U.S. would be able to apply retaliatory tariffs to cars imported from Japan. The scale of Japan’s automotive industry is seven times that of the nation’s rice production industry, and if it was affected, there would be no choice but to scrap the acreage reduction policy. 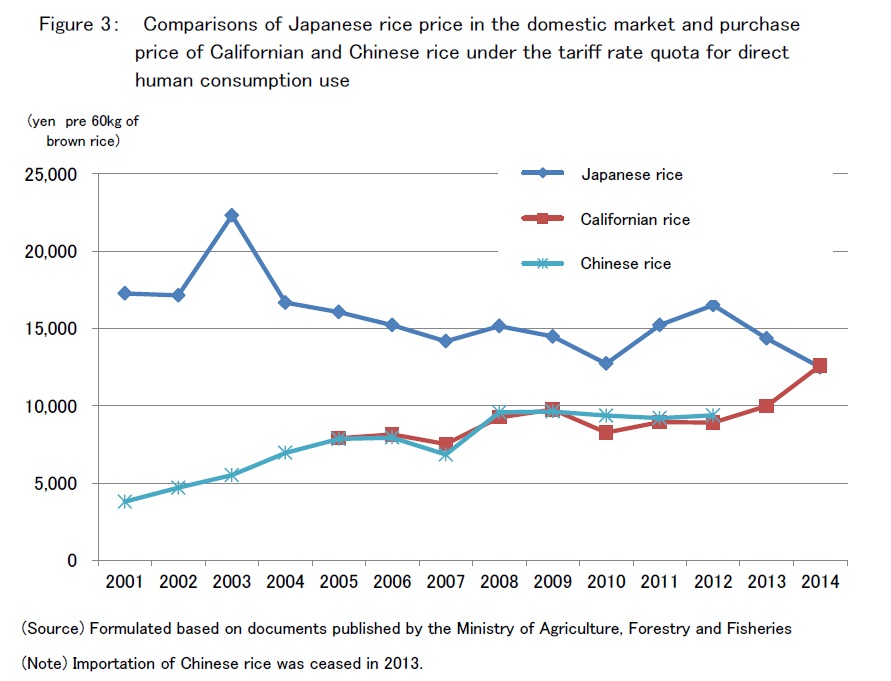 With the decline in the price of domestic rice and the increase in the price of imported rice in 2014, the disparity in prices between the two vanished, and the trend began to reverse. (Figure 3) If rice was exported under these conditions, it could be sold at a higher price than the domestic price. There would therefore be no need to engage in acreage reduction in order to maintain domestic prices at a lower level than international prices. If the acreage reduction system was scrapped, the domestic price of rice would fall by around 8,000 yen per 60 kg, enabling large-scale export. If exports increased, then the volume of supply to the domestic market would be reduced, and this would increase the price of rice. If the export price was 12,000 yen per 60 kg, the domestic price of rice would increase to the same level, and domestic rice production would increase.
Over the short-term, it would be possible to pay full-time farmers affected by the decline in the price of rice directly from public finances. The 400 billion yen freed up by the scrapping of acreage reduction subsidies would make sufficient funds available. These direct payments would become unnecessary when rice prices increased. In addition, the decline in the price of rice would mean that small-scale part-time farmers, unable to cover their high costs, would quit farming, and lease their land to full-time farmers. The ability of these full-time farmers to cover rents would have been increased by direct payments from the government, and they would accumulate land, enabling them to expand the scale of their operations and reduce costs. The acreage reduction program forbids varietal improvements which would increase yields, and at present yield per unit area for Japanese rice is 60% lower than it is for Californian rice. Because cost is calculated by dividing cost per unit area by yield per unit area, increasing yield per unit area by scrapping the acreage reduction program would reduce costs. Increasing the scale of farms and increasing yields would significantly boost the price competitiveness of Japanese rice.
Despite being protected by high tariffs, Japan’s domestic market is shrinking as a result of the decline in the nation’s population. The realization of greater price competitiveness for high-quality Japanese rice through the scrapping of the acreage reduction program would not only render tariffs unnecessary, but would also open up export markets throughout the world. This will be the key to the revitalization of Japanese agriculture.