In the 70 years since the end of the Second World War, the Japanese fisheries have been allowed to operate in “Olympic-style” fishing1), in which victory goes to the operator who catches the most fish, due to a lack of amendments of the Fisheries Act and the Fisheries Cooperative Association Act. This has created the decline of fisheries resources and the fisheries, and is a major factor in the decline of rural area economies in Japan. Being different from this situation, countries including Norway, Iceland, and the US have reformed their fisheries Acts and regulations and spurred growth in their fisheries. These nations have succeeded in building fisheries that contribute both to the economies of rural areas and the economy of the nation as a whole. It is essential for rural area revitalization in Japan so that she must to rebuild resources, attract external investment and promote employment based on examples such as those nations’ above-mentioned.
While the cases of success are limited, examples of medium- to long-term reform initiative of the fisheries can be found in Japan. These include the case of the individual quota (IQ) system2) introduced to one Niigata Prefecture shrimp cage fishery, considered in this section of SPACE NIRA by Kojun Hamada, and the case of the attempts put forward by municipalities on Hokkaido’s Rishiri and Rebun Islands, discussed in this section by Mari Koyano.

１．The Decline of Japan’s Fisheries: The Most Serious Case among OECD Members

Japan’s fisheries have displayed the most marked decline among members of the Organization for Economic Co-operation and Development (OECD) (Fig. 1). 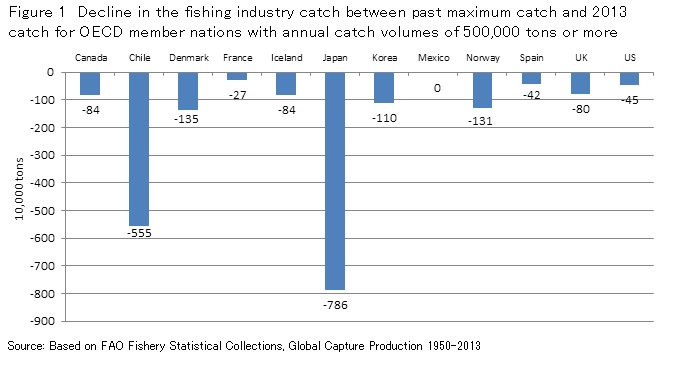 Japan’s deep-sea fishing industry has faced the successive imposition regulations in 200-mile Economic Exclusive Zones by the coastal nations, and today there are only a few remnants of the industries, such as purse seine fishery operation in the waters of Pacific island nations and deep-sea longline tuna fisheries.
In addition, there has been a conspicuous decline in the volumes of catches of fish species within Japan’s Exclusive Economic Zone (EEZ). The peak catch of 11.3 million tons for fishing operations within 200 nautical miles of the Japanese coast was taken in 1985; this figure was reduced to 3.53 million tons in 2015 (Fig. 2). The coastal fisheries also declined from a catch of 2.10 million tons in 1977 to 0.7 million tons in 2015 (excluding scallops, and salmon around Hokkaido, resources of which have increased as a result of hatchery breeding programs). 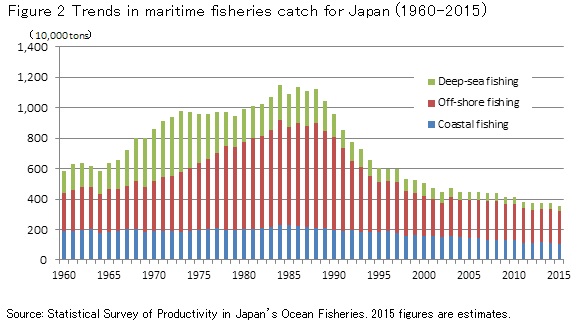 Over-fishing has resulted in a conspicuous decline in catches for medium-sized fisheries and off-shore fisheries (trawl-net fishing, etc.) conducted within Japan’s 200-mile Exclusive Economic Zone. Small-scale coastal fisheries and marine aquaculture has also experienced a continuing decline, with the recent reclamation of the lands of coastal waters and the constructions of large-scale embankments causing the loss of favorable breeding and fishing grounds in seaweed beds, estuarine and tidal flats, and a marked deterioration of fishing grounds, and a lack of new investment into the fisheries. Olympic-style fishing is mostly responsible for all these afore-mentioned.

２．Overseas Success in the Recovery of Fisheries Resources and Fisheries

Almost all of the fisheries products imported by Japan originate in Norway, Iceland, Canada and the US state of Alaska. All of these have scientifically assessed their fisheries resources, set targets for the sustainable maintenance or recovery of those resources, calculated Available Biological Catch (ABC), and set Total Allowable Catch (TAC) below ABC. In addition, they also apply Individual Quota (IQ), in which the TAC is divided among individual fisheries operators based on criteria including their historical catch volume.
In advanced fisheries nations other than Japan, Individual Transferrable Quota (ITQ) have been introduced and established, and fisheries businesses have increased their stability. For example, the seafood company VSV, located on the Westmann Islands off the southern coast of Iceland, was formed by individual small fishermen who put together their investments, enabling them to achieve more stable fisheries operational management. In the future, the company intends to conduct further investments and secure highly-educated personnel in order to enable it to reduce its simple workforce while also ensuring a stable supply of fish to the market. It also purposes to rationalize its management of fisheries business.
The Individual Vessel Quota (IVQ) introduced by Norway in 1990 has also produced positive outcomes. The government of the Norway is now examining reforms to promote the further stability of the Quota management scheme for the next 20 years. They are scheduled to come to conclusions in December. Like oil resources, fisheries resources are regarded as common resources of the people living in Norway, and the country is examining the possibility for the introduction of resource rent and transferability of catch quotas of smallest-category of fishers.

３．New Initiatives in Japan: The Cases of Niigata Prefecture and Hokkaido’s Rishiri and Rebun Islands

We can find certain examples of pioneering efforts within Japan itself. An Individual Quota has been introduced in Niigata Prefecture. On Hokkaido’s Rishiri and Rebun Islands, municipalities are pushing ahead with improvement within existing systems, looking towards renewal and revitalization of the fisheries. Miyagi Prefecture’s special fisheries right initiative, which is to open the aquaculture fisheries right to private companies other than the fishermen who are members of Fisheries Cooperatives, is another example of a new initiative to the reform of the Fisheries Act of Japan. These initiatives are yet to be progressed, and their success remains limited, but as a starting point for reform efforts in Japan, it is to be hoped that they will inspire further efforts on a national basis. Since Niigata Prefecture introduced its model IQ program in fiscal 2011, the revenue of operators participating in the program (shrimp pot fishing of sweet shrimp (Pandalus eous)) has displayed a rapid and significant improvement (Fig. 3). 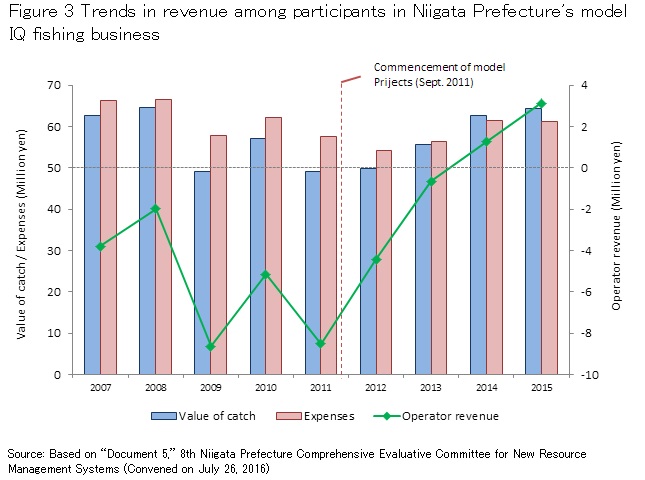 In this section of SPACE NIRA, Associate Professor Kojun Hamada of Niigata University analyzes the economic effect of the establishment of this model IQ program in terms of an increase in the price of fishery products, and discusses the benefits of the introduction of IQ. It is of considerable interest that these benefits do not accrue only to participants in the specific fisheries to which the IQ was introduced; the IQ also has an economic ripple effect on other fishing industries catching the same species.
Based on actual field surveys, Professor Mari Koyano of Hokkaido University offers a consideration, from a legal perspective, of current initiatives being conducted on Hokkaido’s Rishiri and Rebun Islands, elucidating the basis for efforts to manage sea cucumbers, sea urchins, and other important coastal resources. Together, these papers can be considered to offer a succinct introduction to current efforts to promote recovery in Japan’s fisheries resources.